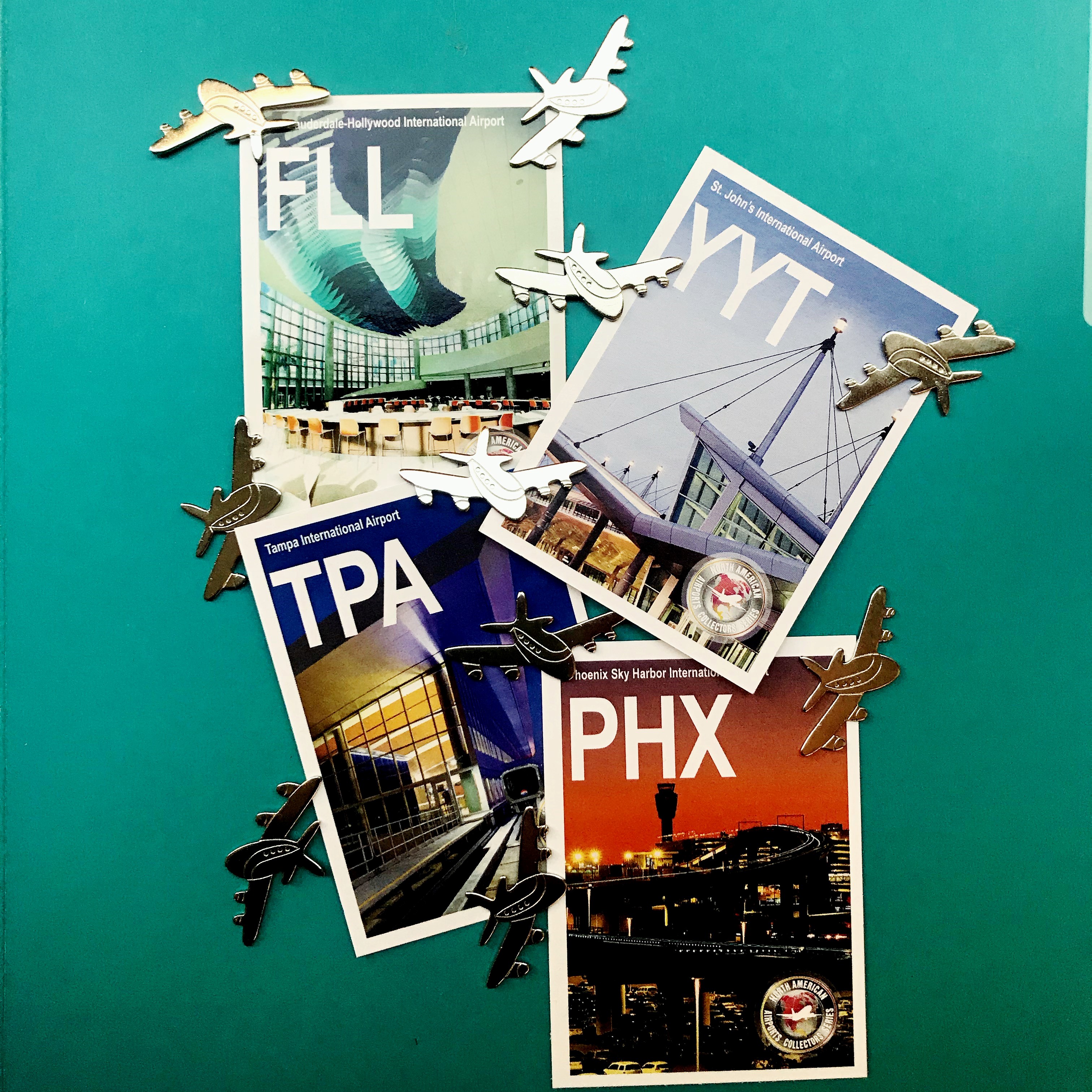 Whatever combination you arrange, three letters can carry a lot of prestige, economic power, a region’s reputation, and even better, generations of travel memories.

The International Air Transport Association’s Location Identifier – or IATA Airport Code- has grown to become both symbols and brands in the travel world. They are also the standout element in ACI’s North American Airports Collectors Series trading cards program. The debut of airport trading cards will celebrate its fifth anniversary this fall.

Well before that 2014 launch, I floated the airport trading card idea as a member of ACI-NA’s Marketing & Communications Committee. There were blank stares, looks of doubt and few hurrahs for the pitch that was purely on paper- and yet to be on cardstock. There were no slick gloss cards to touch. No series of air traffic control towers or airfields aerials. And no airport codes all aligned on the top left.

The genesis for the creation of the trading cards was born out of the constant request from aviation fans and trinket collectors making requests to STL for any type of memorabilia with the airport’s name or airport code. I received lots requests from as far away as Russia. It would be a costly venture to meet that demand with our traditional mementos. The trading card solved that. Paper. Low Cost. Mass quantity. But still highly collectible. It was my belief that if baseball teams, football teams, and entertainment franchises could offer palm-sized collectibles in mass, so could airports.

The pitch became a better sell when STL , ATL and SAN worked up proposed graphic elements and suggested location maps, GPS coordinates, bullet points of airport facts, airport logos and the like. With a unified design, YOW and PIT joined in the development to create the digital mockup of the first five airport trading cards. That overwhelming support tipped the concept from pilot to campaign with the debut in Atlanta, GA at ACI’s Annual Conference where attendees got their hands on the first 17 airport trading cards in the series. From large and mega-hubs, to small and general aviation airports, the series has since grown to nearly 80 U.S. and Canadian airports and a legion of followers, collectors and aviation buffs.

The trading cards travel tremendously well to market the industry with those highly visible airport codes and beauty shots that range from gleaming terminal atriums, airfields at sunset or terminals perfectly framed in front of snow-capped mountains. AUS made its trading card debut featuring one of its giant guitars from an art installation in its bag claim. In 2018, JAX went old-school with a 1968 terminal and airfield shot to commemorate the airport’s 50th anniversary.  The photography options are endless. The backside of the card is more than just traditional statistics, it allows each airport to share their stories, their history, and their importance to the region’s they serve.

At STL, we share the cards at our information booths. We pass them out at community speaking events. They’re perfect for our airport tour handouts for schools and other groups. And of course, they are increasingly in high demand from our “Av Geek” community or, as one former airline executive described himself, from the “world of airline collecting.”

The program has grown so popular that, as one of its ambassadors along with the ACI team, I get complaints as to why there are no cards from this or that airport. Large and small. And then there’s the biggest request, “How do I get the complete set?”

The best answer we can give- travel, visit our trading card airports and pick up one in person. Is there someone with a complete set? We don’ know. Some first year cards – especially those original 17—have been printed and all handed out. That certainly makes them more valuable and exclusive. And some cards are harder to get than others as the program is flexible and allows for member airports to print quantities based on their own marketing budgets. And print locally. When the cards run out, airports can always print more or release a new edition (the STL or YOW series, for example, within the greater Airport Trading Card series). Many airports are into their second or third sets because there are new stories to tell, new art installations or new terminal improvements that yield a stunning visual that is worthy of a new trading card. And there are new terminals themselves (SLC in 2020 and MCI to follow) that will be ripe for a trading card debut or a new edition.  This September, several more airports will debut trading cards for the 2019 Series at ACI-NA’s Annual Conference in Tampa, FL.

The program’s primary goal has always been to use the cards to amplify how airports, individually and as a collective (and vital) transportation system, impact our communities and the traveling public. Then there’s that other goal, giving collectors- young and old- a memento, which leads to them to want a bigger collection from past years and with each new annual collection that arrives each fall in the evolution of the airport trading card series.

Jeff is a former broadcast journalist who spent 14 years in television news as a reporter, anchor, producer and photographer. Before joining Lambert, Jeff was a reporter with the CBS affiliate, KMOV-TV, in St. Louis where he covered developments at Lambert including the new runway project. Prior to his post in St. Louis, Jeff was a reporter and anchor at KTUL-TV, the ABC affiliate in Tulsa, OK. He started his news career as a producer and reporter at KXII- TV in North Texas. Jeff is a graduate of Texas Christian University in Fort Worth, Texas. 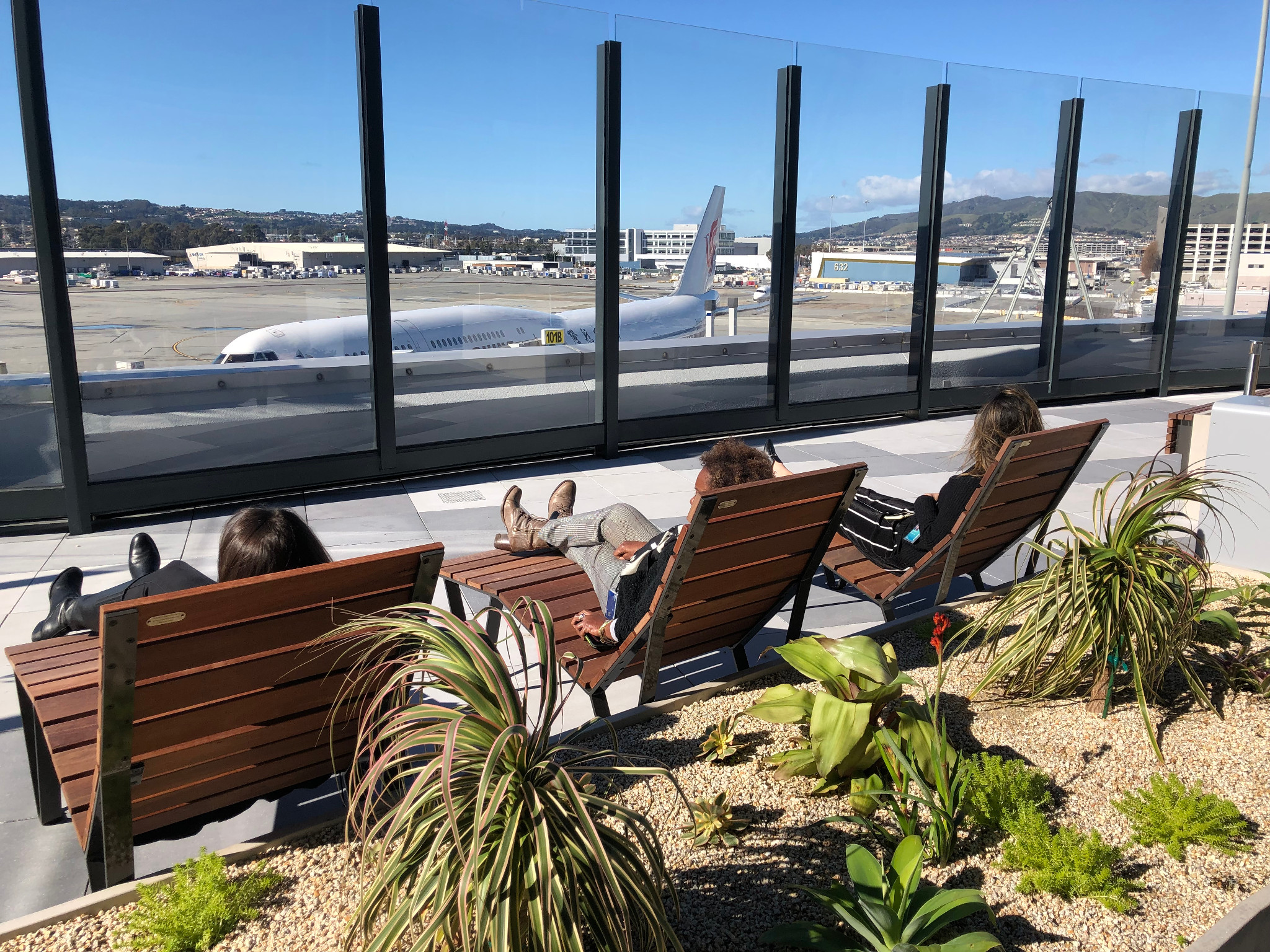 Improving the customer experience is top of mind for airports of all sizes across North America. As passenger needs change, airports are beginning to phase our unnecessary, under-utilized or redundant features, like payphones, banking services and smoking rooms, while continually expanding and enhancing passenger experience programs and amenities for airport users.

Of the 69 airport respondents to our survey in 2017, 19 said they had observation/spectator terraces. As of Feb. 6, we can add one more airport to that list.

San Francisco International Airport (SFO) has opened its first of two outdoor terrace and observation decks. This new 2,997-square-foot, open-air outdoor terrace gives passengers a 180-degree view of the airfield. The terrace is only available to passengers with boarding passes and is located at the end of the International Terminal, Boarding Area G. Ten-foot bird-safe glass panels shield passengers from wind without obscuring the view.

“This outdoor terrace gives our guests a relaxing oasis within our terminals and invites travelers to rediscover the excitement and magic of air travel,” said SFO Airport Director Ivar C. Satero.

The new terrace was part of a $55 million upgrade to the airport’s International Terminal facilities. SFO also plans to construct a second observation deck later this year and located pre-security in Terminal 2.