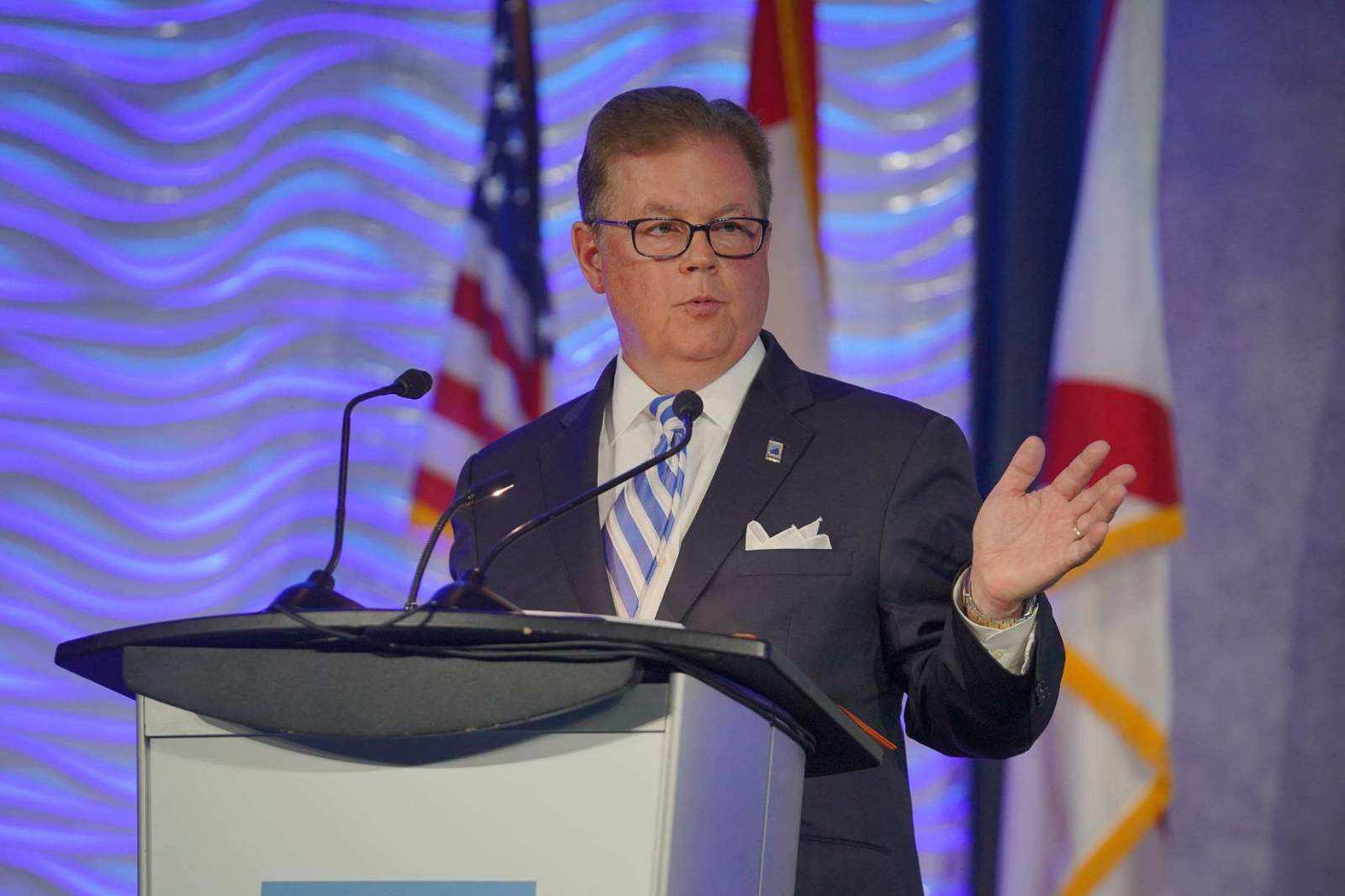 Good morning, ladies and gentlemen! Welcome to Tampa for our 2019 Annual Conference and Exhibition.

Thank you, Mayor Castor, for that wonderful welcome and for being with us today. And a very big thank you to our very gracious host and my good friend, Joe Lopano, and the entire team at Tampa International Airport. Joe is a dynamic airport CEO and a forceful advocate for airports. We appreciate the warm welcome to your great city – and we are very grateful for the opportunity to be here.

I also want to acknowledge and thank my good friend Angela Gittens with ACI World. As you may know, Angela will be retiring next year and all of us are grateful for her many years of service to our industry. I have enjoyed working alongside her as we work to advance the global airport industry. Angela, you will be greatly missed.

As you know, this is our industry’s premier event. It is an important opportunity to reflect on what we’ve already accomplished and to outline what we’re going to tackle next.

Given record breaking travel volumes, there are no shortages of challenges and opportunities.

As we released in our North American Annual Traffic Report this morning, passenger and cargo growth across North America are both up more than five percent to nearly 2 billion passengers last year.

These record-breaking numbers clearly demonstrate the immense pressure everyone in this room faces given the current constraints we experience in the areas of infrastructure investment and staffing shortfalls for security screening.

But that’s not news for you. Everyone in this room knows we don’t have 9 to 5 jobs.

Everyone here works around the clock to facilitate safe and efficient travel for nearly 3 million passengers each day.

And we aren’t just working to solve the challenges immediately in front of us. We are simultaneously grappling with challenges that are 20 to 30 years down the pike.

It’s no small task and you do it with determination and pride. That same pride and determination is what drives our organization to work on your behalf with policymakers in Ottawa and Washington.

I am happy to report that we have had a lot of success since we met in Nashville last year.

And where we haven’t won just yet, we’re making significant progress to move the needle forward.

But before we dive into our accomplishments, I need to tell you a short story.

As you all are aware, several airport members – including Joe – and I met with President Trump early in his term at the White House.

We talked about infrastructure, how fixing America’s airports would create local jobs and improve the travel experience, and how we need Congress and the administration to step up to make sure airports could fund these long overdue and vital projects.

In my view, it was a productive conversation. We left the White House in 2017 feeling pretty good that help may be on the way.

So, flash forward a year or so and I happened to see the president at an event outside of the White House.

Surprisingly, he approached me and said, “Airport man! How are we doing on airports?”

I knew he didn’t know my name, but I was a little taken aback because he clearly remembered our meeting. I said, “Sir, I have to be honest, not so good.”

Then I went on to explain to the president that a lot of what we had talked about just isn’t getting done to modernize our infrastructure, and the president appeared to take it all in.

He told me he understood our positions and was committed to working with us on these issues, which I thought was good.

Now, I’m not telling you this story just to let you know that the President of the United States calls me “Airport Man” – even though I think it’s cool and I might need to update my business cards.

I’m telling you this because I want to assure you that top leaders in Canada and the United States know our priorities and know we are willing to invest time and energy into achieving those objectives working together.

Today, I would like to talk about the progress your trade association has made over the past year – largely thanks to the leadership of our members.

Let’s first start with infrastructure. With growing passenger enplanements and aging facilities, there is no doubt that there are tremendous airport infrastructure needs in the United States and Canada, with airports in both countries seeking government reform.

North American airports remain some of the busiest in the world, with several airports ranking among the world’s top 20 airports for passengers and, importantly, for cargo. Our airports are busy places, and they are only getting busier each year. Our needs couldn’t be more clear.

We are leading the way to address these significant funding gaps, which we estimate to be tens of billions of dollars each year. It’s a message we have taken directly to Capitol Hill. Airports in the United States remain committed to modernizing their local user fee for airport passengers.

And as airports increasingly look for new non-aeronautical revenue opportunities, real estate development and land use issues are increasingly important at U.S. airports.

We led the effort in Congress last year to get the FAA out of the way of approving local land-use projects on non-federally funded land, unless they interfere with safe and efficient aircraft operations. That was a big victory.

In Canada, airports are seeking more government investment into safety and security at small airports and federal investments into airport-ground connectivity, such as regional rail and transit.

Simply look at what Toronto Pearson is doing to better connect the airport to rail and roads to enhance the airport’s connectivity within its region.

On the security front, there’s also significant momentum behind our efforts to improve the way we screen passengers and reduce congestion at security checkpoints in North America.

America’s airports have faced a major challenge this year with the redeployment of hundreds of CBP and TSA personnel away from airports to the southern border.

We led the successful push in Congress for supplemental funding so CBP could continue paying overtime to officers at airports during the busy summer travel season.

In the bigger picture, we have been at the forefront of building a new and diverse coalition of industry stakeholders who support improving travel and trade facilitation through CBP ports-of-entry by increasing customs officers for passengers and cargo.

We – along with our airline partners – are also closely tracking the development of new biometric programs at both CBP and TSA.

Many airports are leading the drive to adopt these emerging technologies, and we are working to ensure there is a proper return on investment for the airports and an improved airport experience for travelers.

In Canada, work is underway through the Canadian Airports Council to improve processing through international arrivals, U.S. Preclearance departures and international connections.

Canada’s airports are also playing a leadership role in the restructuring of the screening function away from government into a not-for-profit, industry-led model.

Airports are also engaged with stakeholders in thinking about new and emerging security threats.

That’s why we’ve worked with the drone industry to establish a blue ribbon task force comprised of U.S. and Canadian airport, airline, and security experts to address drone threats to airports. Unauthorized, unmanned aerial systems pose a serious issue within our airspace and we are figuring out how to best mitigate that threat in North America.

Let me be clear. We do not oppose the use of drones. We just want to keep unauthorized drones out of the complex airspace around our airports. It’s not a challenge airports can solve alone, and that’s exactly the role of your trade association.

Ladies and gentlemen, you have given us the privilege of advocating and leading on your collective behalf, and our entire organization remains grateful for that trust.

We are winning because you have been willing to step up for the industry. I’m not sure I could have said that with such conviction when I first joined this organization six years ago.

You are the reason for our success. I am here today to ask you for a renewed commitment to make sure our priorities become a reality.

Outside of the big picture policy changes we’re fighting for, the airport industry continues to lead the way in improving the passenger experience in real and tangible ways. I know our members are dedicated to meeting each passenger’s unique needs.

For instance, we all know that airports can be loud, crowded, and overwhelming to some travelers.

Over the last year, Miami, Pittsburgh, and Birmingham airports have unveiled airport sensory spaces, designed for those traveling with loved ones on the autism spectrum. What a wonderful idea that is.

By providing a space where travelers can familiarize themselves with airplane size constraints and decompress before heading to their gate, these airports are increasing accessibility for all air passengers regardless of their individual needs.

These examples are part of countless efforts being executed by airports across North America to enhance the passenger experience.

While these may seem like “small” changes, we are seeing airports embrace innovation and ingenuity to make a world of difference to passengers. We relish our role of bringing airports together to share in approaches to common challenges and exchange best practices.

Because of your hard work, our organization is the strongest we’ve ever been. Thank you for making my job a whole lot easier.

So the next time the President asks me, “’Airport Man,’ how we doing?” I want to tell him, “Sir, we are doing great, and our airports are doing even better.”

I can assure you that we won’t stop until we are able to achieve our policy objectives. I only have one gear, and that’s forward.

Thank you for your commitment to this industry and for your hard work for the millions of passengers we serve.

Together, we will succeed, and I thank you for the opportunity to continue to serve. So, ladies and gentlemen, let’s get to work.