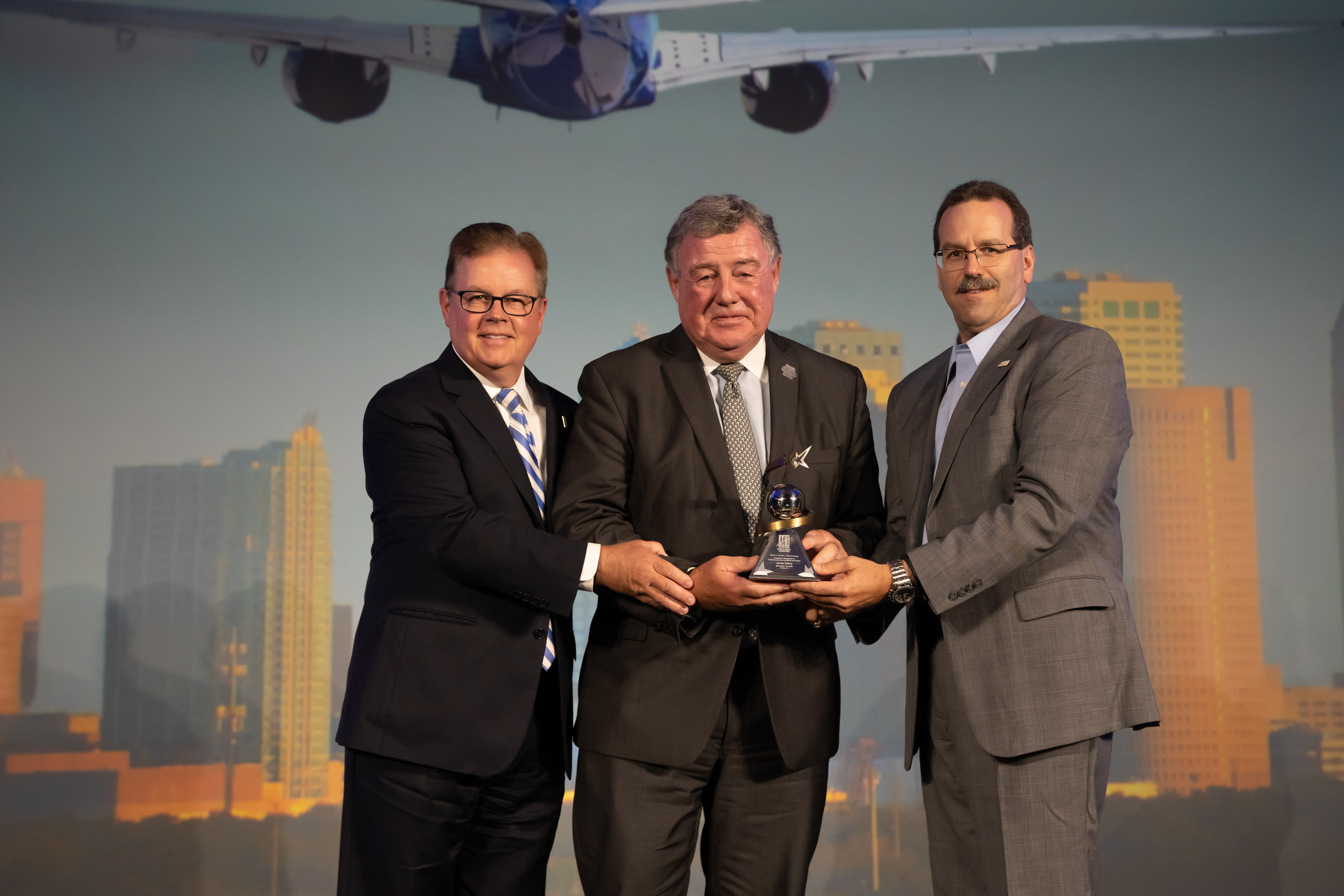 TAMPA, FL – Airports Council International-North America (ACI-NA) announced that James (Jim) Cherry has been named the recipient of the 2019 Williams E. Downes, Jr. Memorial Award.  The Downes Award, the highest honor given by ACI-NA, is presented to an individual who has demonstrated outstanding leadership in promoting the cause of airports and aviation throughout the local, national and worldwide communities. The award was presented during a special ceremony at the 2019 ACI-NA Annual Conference and Exhibition in Tampa, FL, on Sept. 16, 2019.

“Jim Cherry was instrumental in developing creative approaches to improve passenger safety and security, improve airport technology and the passenger experience throughout his career,” said ACI-NA President and CEO Kevin M. Burke.  “Without his leadership and fostering of cooperation among various agencies, this work would not have been possible.  ACI-NA congratulates Jim on this well-deserved recognition.”

During his 15-year tenure at Aéroports de Montréal, Cherry successfully led the transformation of both Mirabel and Pierre Elliott Trudeau Airport, the restoration of good relationships with the airlines, and the implementation of new infrastructure – both physical and technological. During his tenure, he also served as chair of ACI-NA, CAC and ACI World and was instrumental in the relocation of ACI World headquarters to Montreal and the adoption of the Rio +20 Global Biofuels Initiative.

Prior to joining Aéroports de Montréal in 2001, Cherry, a Montreal native, had built a successful career in financial and project management in the international aerospace, defense and rail sectors at companies like Bombardier Inc., Oerlikon Aerospace Inc., CAE Inc. and ALSTOM Canada, and is a graduate of McGill University. He is currently consulting for ARUP.

“While at ADM, Jim was a great believer in consultation and partnership with airlines, tourism organizations, business communities and airports across the globe,” said Lew Bleiweis, Executive Director of the Greater Asheville Regional Airport Authority and Vice Chair of Airports Council International – North America (ACI-NA). “Through his work, he built strong relationships to develop and consolidate ways to enhance airport management.  All of his contributions are foundational for airports today.”

Each year, ACI-NA presents the Downes Award to an aviation leader who has demonstrated strong and outstanding leadership and action in the cause of airports and aviation as a vital part of the local, national or worldwide aviation community; successful work for acceptance, development and support of needed airport programs; cooperation among various segments of aviation, with the goal of bettering airports; or, conceived or fostered a creative or innovative approach to solving today’s problems and planning for future airport and aviation development.