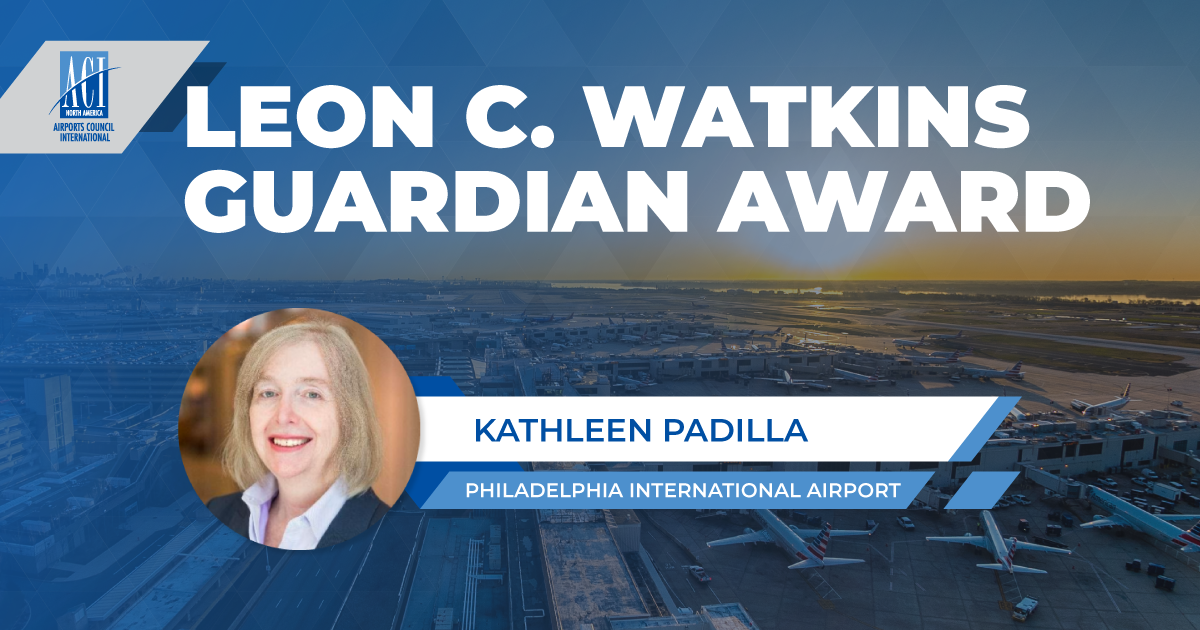 WASHINGTON – Airports Council International-North America (ACI-NA) today announced the recipient of the 2021 ACI-NA Leon C. Watkins “Guardian Award” for Excellence in Business Diversity: Kathleen Padilla, deputy director of aviation for diversity and inclusion at the Philadelphia International Airport (PHL) and Northeast Philadelphia Airport (PNE). The Guardian Award recognizes a business diversity leader who has promoted the growth and evolution of minority- and women-owned businesses and suppliers, while also fostering the advancement of civil rights and equal opportunities for all within the airport business environment.

“Airports are vital members of their local communities and have an important role to play when it comes to helping them grow and thrive,” said ACI-NA President and CEO Kevin M. Burke. “Kathy Padilla has a long history of community leadership, service, and advocacy, and her passion for lifting up others is clear. ACI-NA applauds the important work Kathy has done – and continues to do – to foster equal access to opportunities in the aviation industry.”

“I am humbled to receive this award, and it’s an honor to be associated with Mr. Leon Watkins in any way,” said Kathy Padilla. “PHL has an unwavering commitment to diversity and inclusion for minority and women owned businesses, folks with disabilities, people with language access needs, our LGBTQ community, and our traveling guests.”

While overseeing the Office of Business Diversity, Padilla has ensured access to opportunities for diverse and small businesses. In fiscal year 2020, PHL’s Airport Concession Disadvantaged Business Enterprise goal was 19.3 percent; under Padilla’s leadership, the airport achieved 33.74 percent. Throughout the pandemic, Padilla has been instrumental in preventing a disparate impact on disadvantaged-owned concessions during the closing and recent reopening of airport concessions.

Padilla previously served as Director of the City’s Federal Office of Business Diversity and Coordinator for Diverse Business Certification for the City. She was instrumental in shepherding the City’s 2013 LGBT rights law, which made the City of Philadelphia the highest ranked government in the country in LGBT equity by the Human Rights Campaign’s Municipal Equality Index. As a transgender woman, Kathy led a 2019 partnership with Transwork – Philadelphia’s LGBT business association – for DOA’s first-ever job fair for transgender and nonbinary people. Padilla is currently the highest-ranking transgender woman in Philadelphia.

Padilla’s proven leadership and sustained commitment to the values of diversity and inclusion have earned her the ACI-NA Guardian Award for 2021.