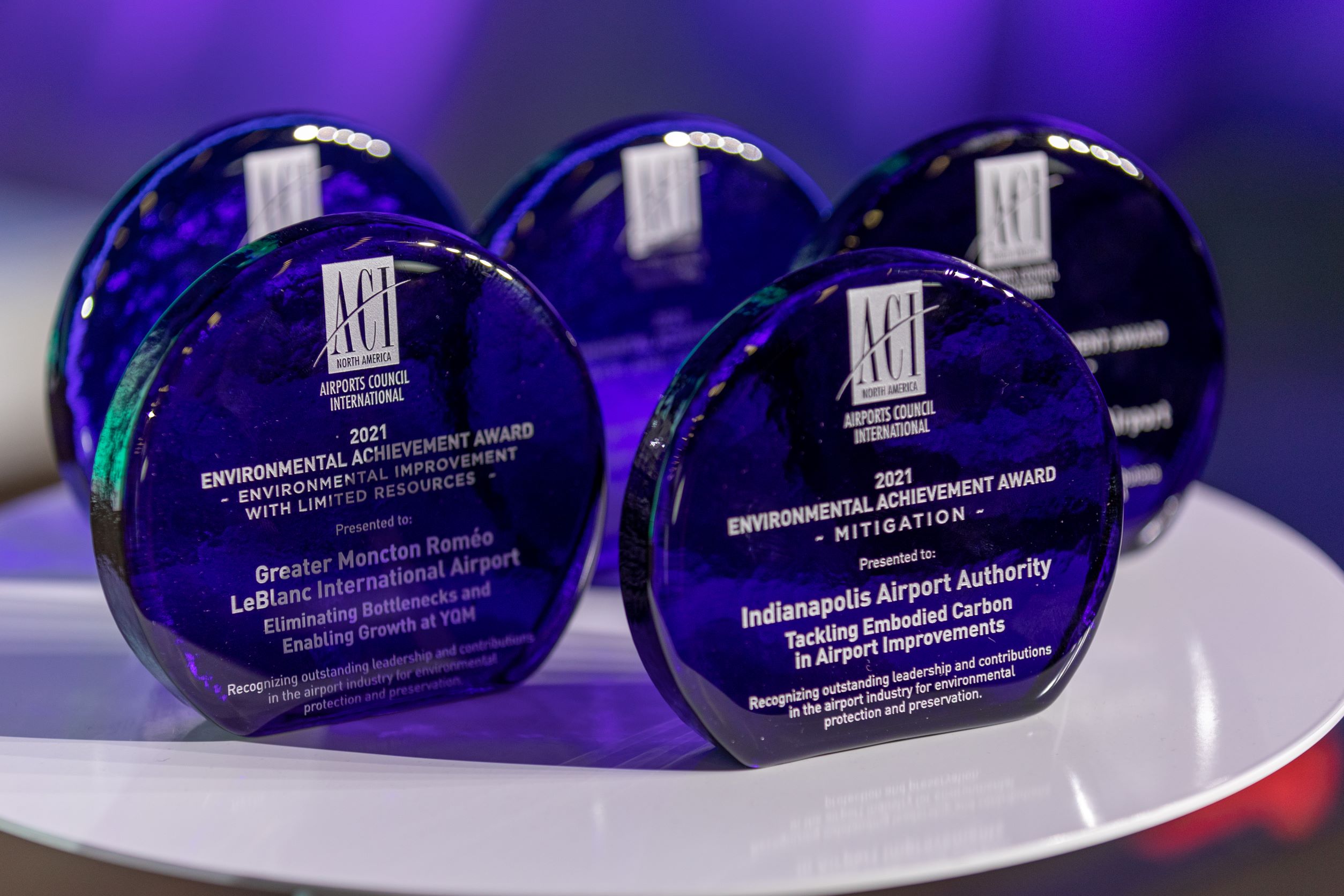 “ACI-NA is proud to recognize this year’s Environmental Achievement Award winners as leaders that have gone above and beyond in their commitment to protecting the environment while serving their passengers and communities,” said ACI-NA President and CEO Kevin M. Burke. “The innovative work of these honorees is exemplary, and we look forward to continued progress as the industry continues efforts to minimize its environmental footprint.”

Established by the ACI-NA Environmental Affairs Committee, the annual Environmental Achievement Awards acknowledge the hard work and achievements of ACI-NA members by promoting awareness more broadly within the airport community, the general public, and regulators of the many notable and innovative efforts being undertaken by environmental professionals at airports. ACI-NA annually awards up to five awards recognizing outstanding achievement in the categories of Environmental Management; Outreach and Communication; Innovation; Mitigation; and Environmental Improvement with Limited Resources.

Winners in each category were selected by a panel of judges who reviewed the project’s environmental benefits, innovation, effective implementation, widespread applicability, and cost-effectiveness.

Environmental Management Award Category: San Francisco International Airport (SFO) was selected as the category winner for its “Zero Waste Concessions Program – Plastic Bottle Ban” project. In April 2021, SFO set forth an ambitious policy to curb plastic pollution and emissions, protect the natural environment, and leap toward its campus-wide goal of zero waste by expanding its Zero Waste Concessions Program to prohibit the sale of all plastic beverage bottles. A first of its kind for the airport industry, SFO is leading the way to address the increasing global plastic problem by permitting the sale of solely sustainable and reusable water bottle alternatives. Since the launch of the program, more than 8 million single-use bottles at SFO have been eliminated. The judges selected the program as an award winner due to the campus-wide effort, and the way the program brings the plastic problem to the attention of many stakeholders

Outreach and Communication Award Category: San Diego County Regional Airport Authority won the award for its Flight Procedures Study to address aircraft noise concerns caused by a previous Federal Aviation Administration (FAA) SoCal Metroplex project surrounding the San Diego International Airport (SAN). Over the course of 15 months, SAN consultants met with the Citizen Advisory and Technical Advisory Committees to discuss the feasibility of suggested flight procedure changes. More than 20 versions of flight procedure changes were reviewed to determine feasibility without shifting noise to new communities. With a wide range of community participation and consistent involvement with aviation stakeholders, this study resulted in four separate flight procedure recommendations that were submitted to the FAA. The judges found the project to be a particularly good example of stakeholder outreach management.

Innovation Award Category: Pittsburgh International Airport (PIT) was selected for its “PIT Microgrid Project.” After reports of energy emergencies that devastated other airports and institutions, the Allegheny County Airport Authority (ACAA) set out to increase PIT’s energy resiliency. ACAA determined the best way to meet their energy goals was to develop an airport-wide microgrid – an independent electricity source that operates autonomously. PIT now operates a microgrid consisting of five natural gas-fueled generators and nearly 10,000 solar panels, capable of producing more than 20 megawatts of electricity. Operating this facility has resulted in a reduction of 7,850,000 pounds of carbon annually – equivalent to eliminating 9 million miles driven by passenger cars or the annual energy from 440 homes. The judges particularly appreciated the creative approach and re-use of otherwise un-usable land.

Mitigation Award Category: Indianapolis International Airport (IND) was recognized for its “Tackling Embodied Carbon in Airport Improvements” project. The Indianapolis Airport Authority (IAA) has a long history of carbon management and reduction and continued this legacy by spearheading the first-ever FAA-approved design for an airfield project using carbon capture technology. This carbon capture technology reduces the amount of cementitious material, the main culprit of carbon emissions, in concrete production and captures and stores waste from carbon from manufacturing processes, reducing the amount of carbon entering the atmosphere. The IAA’s mission to incorporate carbon reduction technology on its runways represents a true commitment to environmental responsibility and the mitigation of climate change. The judges commented that they felt this is an exciting project, and they particularly appreciate that the mitigation was incorporated into an existing project.

Environmental Improvement with Limited Resources: Greater Moncton Roméo LeBlanc International Airport (YQM) was selected for its “­­­­Eliminating Bottlenecks and Enabling Growth at YQM” project. Prior to this project, an unregulated amount of de-icing pad effluents from the airport contaminated the sanitary sewer system of the City of Dieppe, presenting a monumental environmental challenge. As a result, the Greater Moncton International Airport Authority created a new de-icing management system to ensure compliance with environmental regulations and reduce the harmful effluents entering aquatic ecosystems. The project includes new underground infrastructure that controls the release of glycol, a chemical compound that assists bacteria used in wastewater treatment plants. The project mitigated environmental impacts in the City of Dieppe and saved the airport an estimated $1 million annually. The judges found this project to be an excellent example of working with the municipal utility, and making the right thing happen in partnership with the utility and community