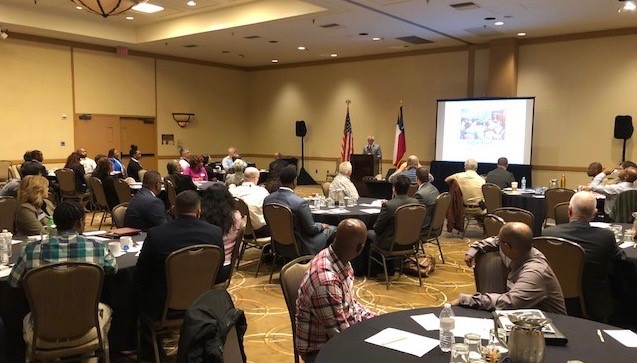 As community partners, airports are continually embracing opportunities that recognize the immense contributions veterans make to our communities and empower them as they move beyond their military service.

Houston Airport System is one of several airports across North America leading the effort to bring the Edge4Vets jobs training program to prepare and connect veterans to jobs that can lead to careers in aviation.  This work is incredibly important in Texas, which boosts one of the largest veteran populations in the United States. Edge4Vets is part of Airports Council International – North America’s “Workforce of the Future” initiative.

The program combines a workshop series with online training to help veterans do what business leaders say they most – that is, learn how to translate their strengths from the military, including values and skills, into “tools” for civilian success. The program enlists HR executives and hiring managers from partner companies, including airport authority departments and stakeholder companies, to attend the Edge4Vets workshop and serve as “mentors” to offer feedback to the veterans as Edge4Vets teaches the participants how to create a Plan4Success.

The Plan4Success guides them in the creation of statements in four areas – vision, values, skills and action – that identify their strengths and gives them an opportunity in clear, concise language to express how they will APPLY their military strengths to land a job that can lead to a career for the life they want.

Houston introduced Edge4Vets in 2018 as a pilot and now is working with partners in its employer network – that includes Houston businesses as well as airport employers – to grow and expand the scope and reach of the program.

Part of this expansion includes bringing in Goodwill Industries and its Operation GoodJOBS program as a partner to provide wrap-around support to veterans. Edge4Vets registers participants through a recruiting effort with support from the City of Houston, the Texas Veterans Commission and local schools, then Edge4Vets refers those who register to Goodwill for preparation in advance of the workshop.

Following the workshop, Edge4Vets channels participants back to Goodwill for personal support to refine their Plan4Success, hone their resume, and follow up on job interviews they lined up at the Edge4Vets workshop.

The combination of career preparation and this enhanced wrap-around support provided through the Edge4Vets/Goodwill partnership is giving Houston Airport System a powerful “one/two punch” to add talented veterans to the HAS workforce to strengthen the airport for the future.