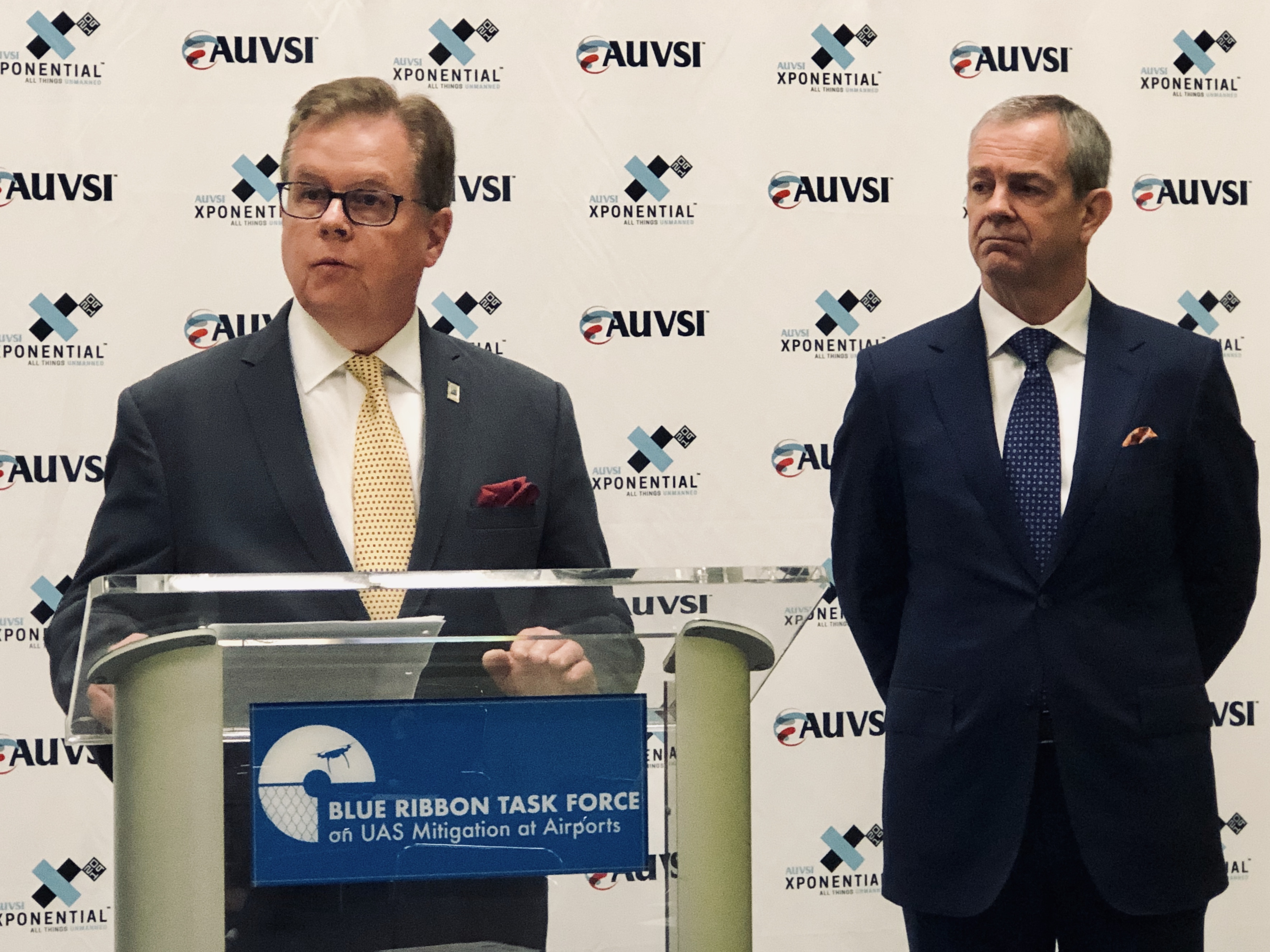 CHICAGO – The Association for Unmanned Vehicles Systems International (AUVSI) and Airports Council International-North America (ACI-NA) today announced the formation of a Blue Ribbon Task Force on Unmanned Aircraft System (UAS) Mitigation at Airports. The Task Force brings together a cross-section of stakeholders representing the airport, UAS and manned aviation communities to refine procedural practices and provide a policy framework to address the timely and critical issue of incursions by unauthorized UAS at airports and how best to mitigate this threat.

“UAS interfering with manned aviation is a serious issue, and it requires serious solutions. That is why we are bringing together the best and brightest minds to recommend a plan to keep our skies safe for the flying public,” said Brian Wynne, president and CEO of AUVSI during a news conference at XPONENTIAL 2019. “While UAS hold tremendous societal and economic benefits, occasional bad actors threaten to undermine the great progress we have made and even put responsible, legal UAS operations in a negative light.”

Serious concerns regarding unauthorized and unsafe drone operations near airports have been highlighted by the major disruption such activity caused at London Gatwick Airport in December 2018 and Newark Liberty International Airport in January 2019. The Task Force members will examine and develop recommendations around two main areas. First, they will generate expert-led dialogue to refine procedural practices for airports, law enforcement and other stakeholders to ensure efficient and seamless responses to future UAS incidents. Second, they will develop a longer-term policy framework based on the experience from the initial efforts to deter incursions and emerging technologies. The goal is for this work to lead to and inform future conversations about UAS mitigation at other facilities, such as national landmarks, stadiums, prisons and military bases.

“One of ACI-NA’s highest priorities is ensuring unauthorized and unsafe drone operations do not adversely affect the safety or security of U.S. and Canadian airports,” said Kevin Burke, president and CEO of ACI-NA, at the news conference. “With more and more drones flying in the airspace, we have found ourselves in a new situation with no clear playbook. By bringing together this exceptional group of experts, we are hopeful we can make significant progress in developing best practices that will help airports respond better.”

The Blue Ribbon Task Force will be comprised of former government officials, security professionals and aviation executives, including:

The Task Force starts on May 2 during a keynote session at XPONENTIAL with a panel discussion featuring Mr. Huerta and a representative from the airport industry

As part of its work, the Task Force will meet with experts in UAS technology, national security and defense, law enforcement, government, and those working in the National Air Space, including UAS operators, commercial and general aviation pilots, air traffic controllers, and airline and airport leadership. The Task Force will solicit comments on its website from the public and will explore holding a limited series of in-person and virtual public meetings on UAS mitigation. It anticipates releasing findings over the summer.

“The industry is working with our government partners on remote identification and tracking standards, but we understand that more needs to be done and at faster pace than the regulatory process allows,” Wynne said. “That’s why the industry is stepping up to explore near-term solutions before remote ID regulations are finalized and published.”

For more information on the Task Force or to submit comments, please visit UASmitigationatairports.org.