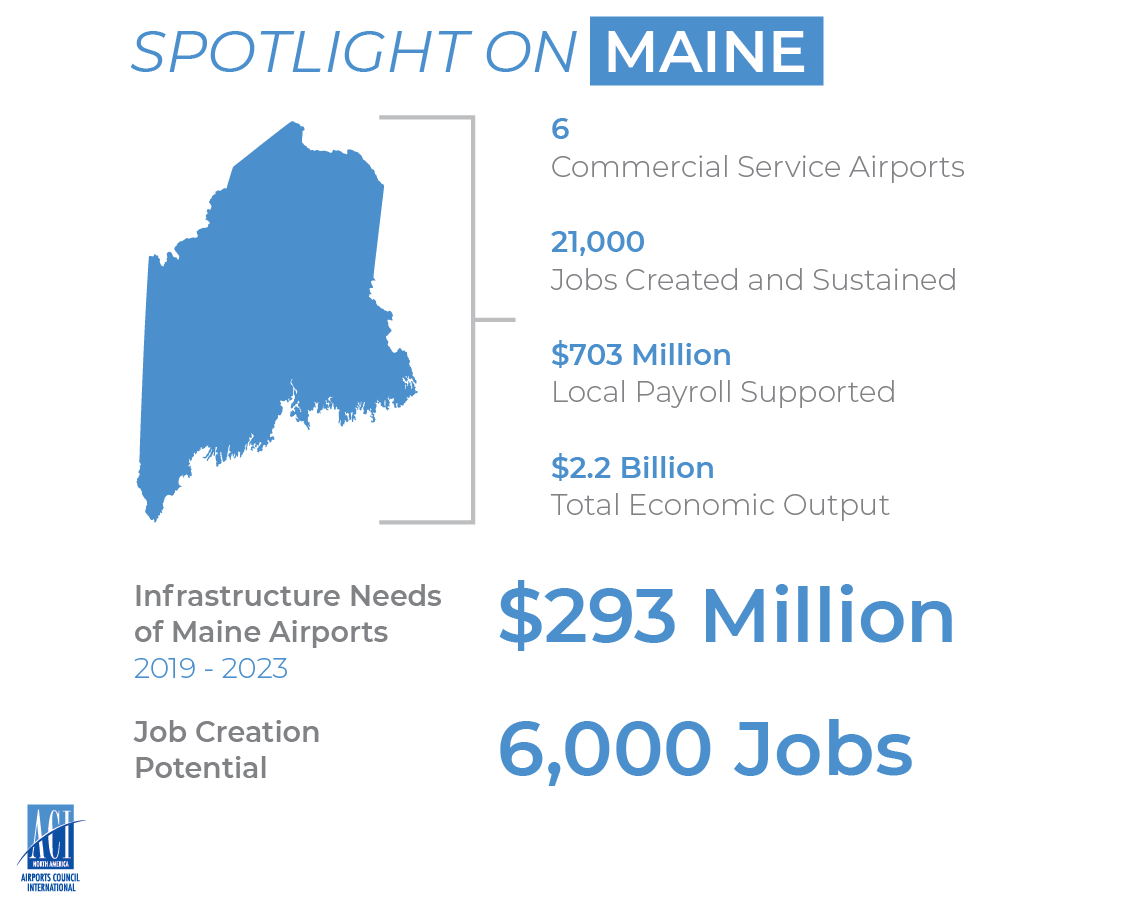 In the Bangor Daily News, Bangor International Airport’s Anthony Caruso said, “It is critical for Maine businesses and people to have a robust connection to the national and global air transportation system. This can only be accomplished through the continuous investment and support of our existing local aviation infrastructure. The user supported, locally implemented, non-tax-based revenue provided by the passenger facilities charge is a proven and successful program for funding airport infrastructure.”

Similarly, Portland International Jetport’s Paul Bradbury said in the Portland Press Herald, “…in 2016, the Jetport proposed a 20-year, $312 million capital improvement plan as part of a sustainable airport master planning process to accommodate the expected 40 percent increase in passenger traffic over this timeframe. The Portland City Council approved the plan, and in December 2018 the Federal Aviation Administration (FAA) accepted an environmental study that helps clear the way for construction and renovations to move forward. But there’s a problem: paying for these upgrades. Infrastructure projects at the Jetport, like those at airports across the country, are funded in part by the Passenger Facility Charge (PFC), a nominal fee that is paid by air travelers who fly in and out of our airports.”

Both airport directors applauded Maine’s congressional delegation – including Senators Susan Collins and Angus King and Representatives Chellie Pingree and Jared Golden – who “have been strong supporters of infrastructure projects and continue to help drive this issue in Washington.”

These op-eds follow on the heels of a letter sent to Congress by a diverse coalition of conservative, free market, and anti-tax organizations calling for Congress to “consider eliminating the PFC cap entirely… We urge members of Congress to reject the claims that falsely equate the PFC user fee as a tax and to support any effort to increase local airport self-help and true relief to federal taxpayers.”

The groups also dispelled misinformation spread by the airline industry, correctly calling the PFC “a local airport user fee. Passengers who pay the fee directly benefit from infrastructure improvements made possible by the fee revenue. And unlike federal taxes, the PFC is collected at the local airport, never touching the federal treasury, and is only available for narrow, statutorily-defined facility improvements at the airport in question.”